Get fresh music recommendations delivered to your inbox every Friday.
We've updated our Terms of Use. You can review the changes here.

Serenades and Odes to a Cracked World (part 1) 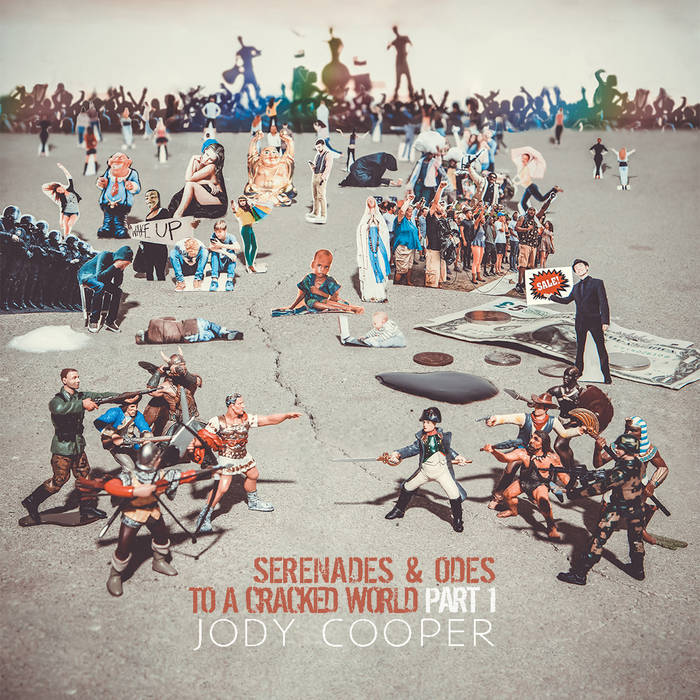 Inspired by a fascination with the albums and artwork of The Beatles, ELO and Pink Floyd, Jody's ambitious mission is to present the idea of the concept album in a way that is both memorable and current. Split into two parts, the first part – disintegration – musically explores both the destructive and constructive aspects of this potent theme: from the call to throw off materialism of “I Forsake the Joneses” to the end of dictatorship of “Song for the Oppressed (Cruelty Dies)”. The second part – integration – is planned for release in 2019.

Jody had the following to say about his new work: “With everything that's happening in the world right now, the time has come for people to start engaging with the problems around them in an attempt to make a positive change. This album is my attempt”.

All songs written, arranged, recorded, mixed and produced by Jody Cooper.
All instruments by Jody Cooper except saxophone on "It's Alright" by Johannes Dau.
Samples on “I Forsake the Joneses”, “One” and “Breakdown” used by kind permission of their respective creators.

Thank you: Olinga for your continued support, patience and encouragement; my family for being the crazy bunch you are and giving me the confidence to begin this adventure; to all my lovely Kickstarter supporters – I couldn't have done this without you!; Jasmina Meyer for agreeing to bring my artistic vision to life; Johannes Dau for his saxophone and discipline on “Alright”; Jonathan Sinclair for the intro sample in “Breakdown”; my Bahá'í family around the world; Robbie Cooper – I know you're out there somewhere inspiring me; Russell Cottier for your patience and willingness to go the extra mile for this album; my musical friends; Toontrack for their most excellent drum sounds; Blahoslav and Marystar at Freesound.org; the websites shutterstock.com, pexels.com and pixabay.com for the amazing photos; to everyone and everything that's inspired me to make this album – you might not know who you are but you're most appreciated!

Multi-instrumentalist singer-songwriter with a
powerful voice – at once looking back to the
great songwriters of the past, while at the
same time possessing a keen melodic sensibility
of his own. No gimmicks, no pretence, just
honest, thought-provoking songs that speak
from and to the soul. ... more